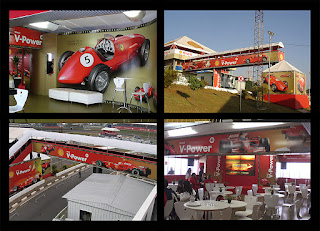 The Ferraris were made for an advertising project.
The Art Director of JWThompson wanted to tell the story of the Shell-Ferrari's 60 years of partnership
showing the cars that were important both to Ferrari and Shell during this period.

It would be impossible to do this job by taking photographs (time and costs) and so he asked me if I could make
the 4 cars choosen to be shown in the advertising campaingn in 3D renderings.
I accepted the work and began to look for references in the internet as soon as we finished our telephone call.
I collected almost 300 hundred pictures of all kinds about the cars and their innards.
In the end of the process the models were submited to the judgment of some Ferrari specialists in England and Italy
and they gave their approval. Thanks God!
Posted by Jomar Machado at 4:57 AM

After working for 6 years for MacCann Erickson I went to work for JWThompson and spent 17 years in their office at Rio de Janeiro. While working for them I focused on story-boards, layouts and art that went to print. During this time I used traditional art materials, pencils, brushes and air-brushes but at home I was already using computers such as a Comodore Amiga and custom built PCs to do my personal freelance work. When Thompson turned it's traditional Studio into the Computer Arts Department in 1994 I was one of the people who joined the change from brushes to mouse. In 2003 I went to work at STUDIOH where I stayed until 2005. Now I'm working as a freelancer in my home office. http://machadoj.cgsociety.org/gallery/